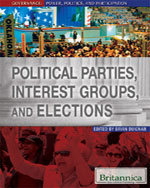 Divergence in opinions, beliefs, and interests is a fundamental aspect of every society. Such plurality often spurs the development of various factions and groups, each seeking to attain its objectives through political and governmental action. Whereas elected officials exercise political power directly, interest groups often operate behind the scenes, lobbying for policy changes that benefit their cause. Readers discover how the general populace influences the way it is governed via political parties, interest groups, and elections within the framework of various forms of government.