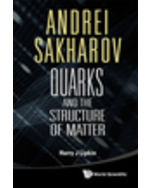 Andrei Sakharov: Quarks And The Structure Of Matter, 1st Edition

In 1980, the Cold War was in full bloom. The Soviet father of the hydrogen bomb and Nobel Peace Laureate turned dissident physicist, Andrei Sakharov, had been exiled to Gorki by the Soviet authorities. Called senile and under heavy Soviet censorship, Sakharov had a hard time communicating his latest scientific results to readers outside of Gorki. Some smuggled results reached the author, Harry Lipkin, who then realized that he and Sakharov were both pioneers in a new revolution on our understanding the structure of matter. The particle physics community had resisted their revelation that the accepted building blocks of matter, neutrons and protons, were composed of tinier building blocks called quarks. What followed was a remarkable adventure in which both scientists fought the Soviet censors, smuggling postcards and manuscripts into and out of the Soviet Union while trying to further scientific progress.Against a backdrop of politics, suppression, and genius, Andrei Sakharov, Quarks and the Structure of Matter details the search for the basic building blocks of matter, the path to understanding the forces that bind them together, and how scientific knowledge is learned, communicated and passed from one group of investigators to another.

Front Cover.
Half Title Page.
Title Page.
Copyright Page.
Contents.
Preface.
1: Quarks and Smuggled Postcards from Andrei Sakharov.
2: Andrei Sakharov and the Weizmann Institute.
3: The Weizmann Institute and the Scientific History of Sakharov's Work.
4: How Scientists Study Nature—Pure and Applied Research.
5: The Building Blocks of Matter—What Is a Quark?.
6: The Forces of Nature.
7: The Weak Force and the Discovery of the W Particle.
Index.