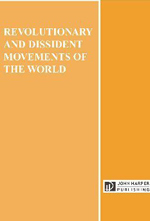 Revolutionary and Dissident Movements of the World, 4th Edition

Updated for the first time since 1991, this guide covers the whole range of illegal political activity worldwide, ranging from terrorist and secessionist organizations through to dissident groups operating clandestinely in authoritarian states. This resource of more than 5,000 organziations and individuals explains the history and contemporary significance of each organization and the political background against which it operates. It demonstrates the impact, country by country, of global currents, such as the rise of Islamist movements, as well as the widespread strength of secessionist aspirations and the horrific human toll arising from local conflicts between these forces and central authorities.

Companion volume of Political Parties of the World (which covers legal political organizations).