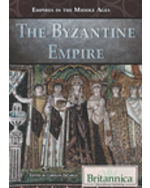 Empires in the Middle Ages: The Byzantine Empire, 1st Edition

Throughout the Middle Ages, various empires reigned across Europe and Asia; a closer look at these empires proves their enduring impact on the world. The Byzantine Empire lasted for more than one thousand years and was one of the world's leading civilizations until its decline in the eleventh century C.E. In this insightful, straightforward text, readers will be led through the rise, the golden age, and the fall of the empire, including the creation of Constantinople and its connection to the Easter Orthodox Christian religion. This immersive book incorporates references to concurrent empires, such as the Ottoman Turks.