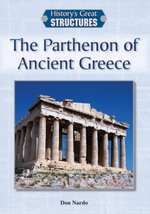 In the fifth century B.C., the Greek city-state of Athens erected the Parthenon, a majestic temple honoring Athena, goddess of war and wisdom. That structure survived the fall of the civilization that built it and today, even in a state of ruin, is widely seen as the most perfect structure ever created.

Front Cover.
Copyright Page.
Contents.
Important Events in the History of the Parthenon.
Introduction: An “Extraordinary Flowering of the Human Spirit”.
1: The Rise of the Greek Temple.
2: The Planning and Structural Phases.
3: Decorations to Please the Gods.
4: Many Centuries of Worshippers.
5: Proud and Magnificent in Ruin.
Source Notes.
Facts about the Parthenon.
For Further Research.
Index.
Picture Credits.
About the Author.