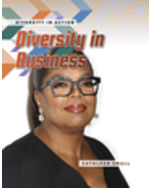 Nineteen-year-old Oprah Winfrey started out as a news anchor, but she blazed through the ranks to become one of the most influential entrepreneurs in the world. Historically, minorities such as women were relegated to lesser positions in business. Although a shift toward more diversity in business began long ago, readers will learn about the tremendous gap that still remains between genders, cultures and races, social and economic levels, and abilities in the business field. This revealing book features some inspiring figures through history who have persevered despite that chasm, as well as those who continue to do so today.