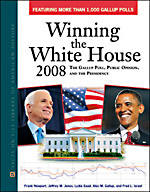 Providing a gripping, month-by-month narrative of the 2008 election and culminating with Barack Obama's historic win in November, Winning the White House 2008: The Gallup Poll, Public Opinion, and the Presidency recounts this fascinating presidential campaign. The book features more than 1,000 polls taken throughout the campaign by Gallup, the oldest and most respected polling company in the world. Each Gallup Poll offers valuable and unique information not available anywhere else: Some give a snapshot of the moment, based on the day’s or week’s events; others delve into the campaign's major issues, such as the Iraq War, the economy, and energy; some trace the impact of the primaries, national conventions, and debates; and still others provide historical perspective by comparing the 2008 race to previous elections in American history. Featuring expert commentary on the candidates, issues, and public opinion polls as well as photographs, tables, and monthly chronologies, this authoritative reference is the definitive account of one of the most critical and transformative elections in American history.