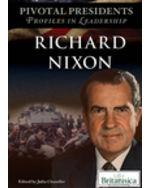 During his presidency, Nixon arranged talks to end the Vietnam War, reestablished diplomatic relations with China, reformed welfare, and established the EPA. Despite his policy achievements, his presidency was undone by his role in covering up the Watergate scandal. In this book, readers will encounter a Richard Nixon of great complexity, a leader whose substantial political achievements were undone by deeply human weaknesses and failures of judgment.