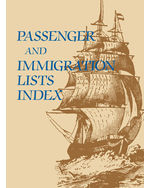 Passenger and Immigration Index: A Reference Guide to Published Lists of about 500,000 Passengers Who Arrived in America in the Seventeenth, Eighteenth & Nineteenth Centuries - 2019 Supplement, 2019 Edition

Passenger and Immigration Lists Index (PILI) was first published in 1981. The initial set indexed 200 lists, covering about 500,000 persons. Since then, forty-two supplements have been released, increasing coverage to more than 5.2 million names. This is still only a fraction of the 35 million immigrants who reached the New World between the sixteenth and mid-twentieth centuries. It is the aim of PILI to lead you to the sources that will unravel some of the mysteries surrounding this fascinating group of people, particularly as they relate to individual family histories.

When your patrons ask for published immigration, passenger and naturalization records of individuals who came to the U.S. and Canada between the 16th and mid-20th centuries, direct them to this comprehensive resource. Here they'll find everything needed for fruitful genealogical research. Main entries in Passenger And Immigration Lists Index provide information such as name and age of immigrant; year and place of arrival, naturalization, or other record indicating that the person indexed was an immigrant; code indicating the source indexed and the page number in the source that contains the record; and the names of all listed family members together with their age and relationship to the main entry. Thirty annual supplements (published 1982-2005) have increased the number of citations to more than four million names indexed.