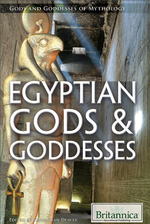 Gods and goddesses—in human, animal, and other forms—were central to the ancient Egyptian way of life. Identified with the natural world, daily living, and the afterlife, they maintained order and prevented chaos from permeating the human world. The figures documented in ancient hieroglyphics are given dimension in this absorbing volume, which examines the characteristics and significance of many of the Egyptian gods and goddesses and also looks at related topics such as ancient symbols and the influence of Egyptian mythology on other cultures and belief systems.