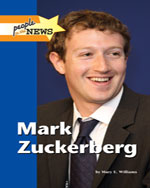 This biography provides a balanced look at the life and career of Facebook creator Mark Zuckerberg. Zuckerberg, currently the wealthiest person on the planet under the age of thirty, says that never set out to run a company and become immensely wealthy. He maintains that he simply loves writing computer code and making technological tools that help people learn, share, and connect more with each other. However, not everyone agrees that Zuckerberg simply wants to build bridges between people. Former colleagues accused him of stealing the idea for Facebook from their social network. Privacy advocates questioned Zuckerberg's motives when Facebook began tracking users' web-surfing habits, sharing that information with advertisers. Moreover, a popular 2010 movie depicting the founding of Facebook painted Zuckerberg as an envious nerd driven by the need to prove himself to the cool crowd. Despite the media buzz and extraordinary wealth, Zuckerberg lives a fairly modest life. In many ways Zuckerberg himself is a study in contrasts: a billionaire who lives frugally, a dropout who donates to educational causes, a hacker aiming to set new rules, and a private person who wants to make the world a more open place.