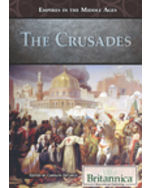 Empires in the Middle Ages: The Crusades, 1st Edition

Many modern-day readers would consider Christians a peaceful people, but their history is steeped in war and bloodshed. This book focuses on a series of military campaigns known as the Crusades, during which Christian warriors attempted to regain the Holy Land (Palestine) from Muslim rule. This inclusive text begins with the origins of these campaigns, with reference to the Selijuq Turks' defeat of the Byzantine armies and Pope Urban II's Council at Clermont, and leads readers through seven well-known crusades to their decline and ultimate failure. It also contains an in-depth look at three special orders of knighthood: the Knights Hospitallers, the Knights Templars, and the Teutonic Knights.

Front Cover.
Title Page.
Copyright Page.
Contents.
Introduction.
1: What Led to the Crusades?.
2: The First Crusade: Emerging Orders.
3: The Era of the Second and Third Crusades.
4: Crusades of the Thirteenth Century.
Glossary.
For Further Reading.
Index.