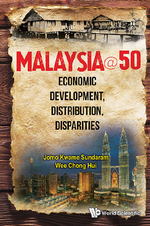 Malaysia has grown and changed a great deal since it was formed on 16 September 1963. It was then seen as an unlikely nation hastily put together as a federation of British controlled territories in the region. Bruneis refusal to join at the eleventh hour and Singapores secession before its second birthday only seemed to confirm such doubts.Yet, it has not only survived, but even thrived, often cited as a developing country worthy of emulation. Ruled by the same ruling coalition since the mid-1950s, it has been tempting to emphasize continuities, and there certainly have been many.Looking back at its last half century, this volume first considers changes in development policy in response to national as well as international developments. The remaining three parts consider how public policy has been influenced by and has, in turn, influenced economic distribution, public finance and economic federalism.Besides the familiar focus on ethnic disparities, regional and other distribution issues are considered.