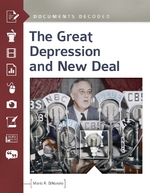 This accessibly written work provides a wide range of primary documents, offering American history students and teachers alike a handy reference volume that examines all important aspects of the Great Depression and New Deal-a core curriculum topic. By modeling how an expert scholar interacts with primary sources, the book enables readers to pick apart and critically evaluate firsthand the key documents chronicling this major American movement. The book leads with an introductory essay that outlines the scope of the volume, explains how the primary documents were selected, and identifies thematic trends and controversies. Annotations by scholars translate difficult passages into language that is easily comprehensible to modern readers and compare key passages throughout, encouraging the reader to cross-reference documents within the volume and connect the dots between them. Readers will be able to interpret the flow of events during the Great Depression, assess the legislative and executive actions that attempted to deal with the economic crisis, and perceive the differences between the fiscal ideas of Presidents Hoover and Roosevelt.