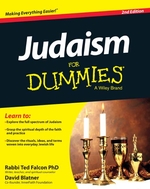 In this second edition of Judaism For Dummies, readers are given a basic understanding of Judaisms rich history and current practices. Featuring 25 percent new and updated content, this new edition includes: Updates to the recent history section with discussions of what has happened in the first decade of the twenty-first century including: the expansion of orthodox political power in Israel; expansion of interfaith work; unfortunate recent anti-Semitic events; and other news. Expanded coverage of Jewish mysticism and meditation, which has become increasingly popular in recent years. New coverage on Jewish views of morality, including birth control, homosexuality, and environmental concerns. Revised recipes for traditional Jewish cooking, updated key vocabulary, and Yiddish phrases everyone should know. An explanation of the foundations of Judaism, including basic beliefs, important texts and the different types of Judaism: Reform, Conservative, and Orthodox. The practices of the religion such as laws, processes, and holidays. Common misconceptions about Judaism and its confusion with Jewish culture.

Front Cover.
Title Page.
Copyright Page.
About the Authors.
Dedication.
Authors' Acknowledgments.
Contents at a Glance.
Table of Contents.
Introduction.
1: What Jews Generally Believe.
2: That's Funny, You Don't Look Jewish: Who's a Jew and Why.
3: It's All One: Judaism and God.
4: A Never-Ending Torah: The Unfolding of a Tradition.
5: A Path of Blessing: Judaism as a Daily Practice.
6: Jewish Mysticism.
7: Ethical Challenges.
8: From Womb to Tomb: The Life Cycle.
9: In the Beginning: Birth and Bris.
10: Coming of Age: The Bar/bat Mitzvah.
11: Get Me to the Chuppah on Time: Weddings.
12: Stepping through the Valley: The Shadow of Death.
13: An Overview of Jewish History.
14: Let My People Go: From Abraham to Exodus.
15: The Kings of Israel: The First Temple.
16: Bracketed by Exile: The Second Temple.
17: The Exiles Continue: The First Millennium.
18: The Greatest Horror, the Greatest Triumph.
19: Jewish Buddhists and Other Challenges of the New Age.
20: The Problem of Anti-Semitism.
21: Celebrations and Holy Days.
22: A Taste of Paradise: Shabbat.
23: In with the New: Rosh Hashanah.
24: Getting Serious: Yom Kippur.
25: The Great Outdoors: Sukkot.
26: Seeking Light in Dark Times: Chanukkah.
27: Celebrating Renewal: Tu B'shvat.
28: A Jewish Carnival: Purim.
29: From Groan to Glee: Passover.
30: Spring Is Busting out All Over: Shavuot.
31: A Day of Mourning: Tisha B'av.
32: The Part of Tens.
33: Ten People Who Helped Shape Judaism.
34: Answers to Ten Common Questions about Judaism.
35: Appendixes.
Appendix A: Oy Vey! and Other Words You Should Know.
Appendix B: A Sampler of Jewish Prayers and Blessings.
Appendix C: Go Now and Learn.
Index.