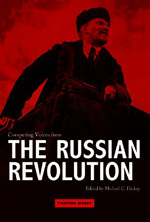 The Romanovs ruled Russia from 1613 to 1917, so it is no wonder that the overthrow of this long-lived dynasty and the events that followed evoked passionate debate. The Russian Revolution of 1917 was followed by the Russian Civil War, pitting "Red" against "White" and, ultimately, resulting in the establishment of the Soviet Union. How did people react? What did they think?