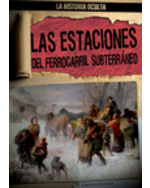 The Underground Railroad was the massive effort by slaves and free people to secretly bring thousands of blacks to freedom in the North during the 19th century. This thought-provoking book will capture readers' imaginations and fill them with awe for the brave "conductors" and "passengers" on the Railroad. They'll learn about the many safe havens, called "depots," that housed fugitives and the secret passages within them that hid slaves from their pursuers. Information about the American Civil War and the Fugitive Slave Act, biographies of figures vital to the Underground Railroad, and stunning photographs and artwork are included in this important work about a terrible time in American history.