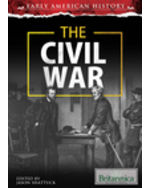 The bombardment of Fort Sumter in 1861 set off the savage four-year war between the North and the South. The North fought to preserve the Union, whereas the South fought to win recognition as an independent nation. The war was a climax to quarrels between the two sides over the interpretation of the U.S. Constitution. Readers analyze the background of the war, military leadership and strategic plans of the war in the West and East, specific battles on land and sea, and the costs of the war.