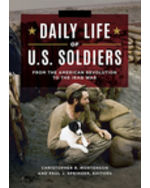 Daily Life of U.S. Soldiers: From the American Revolution to the Iraq War, 1st Edition

What was life really like for U.S. soldiers during America's wars? Were they conscripted or did they volunteer? What did they eat, wear, believe, think, and do for fun? Most important, how did they deal with the rigors of combat and coming home? This book answers these questions and more, with chapters on the American Revolution, War of 1812, Mexican-American War, Civil War, Indian Wars, Spanish-American War, World War I, World War II in Europe, World War II in the Pacific, Cold War, Korean War, Vietnam War, Persian Gulf War, Afghanistan War and War on Terror, and Iraq War. Each chapter includes topical sections on Conscription and Volunteers, Training, Religion, Pop Culture, Weaponry, Combat, Special Forces, Prisoners of War, Homefront, and Veteran Issues. Examines the role of minorities and women in each conflict as well as disciplinary problems, including alcoholism, drugs, crimes, and desertion. Includes selected primary sources, bibliographies, and timelines for each chapter.