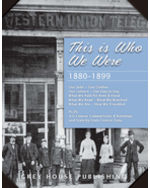 This is Who We Were: 1880-1899 is a dynamic new title built to fill many academic, personal research, and curriculum needs. Collecting information from government surveys, social worker histories, economic data, family diaries, letters, newspapers, and magazine features, the work provides a remarkable personal and realistic look into the past through the eyes and ears of everyday Americans, not just the word of historians or politicians.