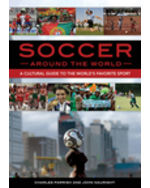 Soccer around the World: A Cultural Guide to the World's Favorite Sport, 1st Edition

How popular is soccer worldwide? Here's one indicator: 3.2 billion people-nearly half of the planet's population-tuned in to watch the 2010 World Cup on television. Soccer matches attract a gargantuan number of fans from around the globe due to the popularity of the sport itself but also because of the nationalism it inspires and the entertainment spectacle of the big games. Distinguished authors and sports authorities, Charles Parrish and John Nauright, examine how soccer impacts societies worldwide by shaping national identities, providing common ground for diplomatic issues, and forging economic and social development. This one-volume geographic guide studies the places in which soccer has a major impact, examining each region's teams, major tournaments, key players, and international performance. The authors organize the book geographically by region and country, with entries reviewing the history of the sport and cultural impact on the area. Each profile concludes with fascinating game-based statistics, such as winners of major tournaments and top goal scorers. The book covers 20 countries including England, Brazil, Egypt, the United States, Cameroon, and Korea.