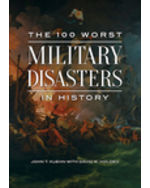 The dynamics of military disaster are equally, if not more, important as understanding how to achieve success on the battlefield. This book covers the gamut of human history as it tells compelling stories of the worst military debacles of all time. It covers battles, campaigns, and wars, starting with the ancient Persians and Greeks and finishing with the U.S. conflicts in Afghanistan and Iraq. Not limited to land warfare, however, it also includes a number of the most disastrous naval engagements and campaigns in world history. The book begins by illuminating the role military strategy and politics played in some of the worst battlefield failures throughout history. Alphabetical entries are augmented with several engaging sidebars related to various military disasters. This eclectic collection includes coverage of many lesser known military disasters such as the Taiping Rebellion, during which 20 times more Chinese died than the number of people killed in the American Civil War.