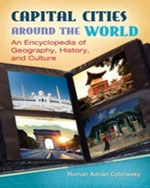 Capital Cities around the World: An Encyclopedia of Geography, History, and Culture, 1st Edition

Every country, even the world's youngest nations, has a capital city-a centralized location which houses the seat of government and acts as the hub of culture and history. But, what role do capital cities play in the global arena? Which factors have influenced the selection of a municipal center for each nation? This interesting encyclopedia explores the topic in great depth, providing an overview of each country's capital-its history and early inhabitants, ascension to prominence, infrastructure within the government, and influence on the world around them. The author considers the culture and society of the area, discussing the ethnic and religious groups among those who live there, the major issues the residents face, and other interesting cultural facts.

Capital Cities around the World: An Encyclopedia of Geography, History, and Culture features the capital cities of 200 countries across the globe. Organized in alphabetical order by country, each profile combines social studies, geography, anthropology, world history, and political science to offer a fascinating survey of each location.