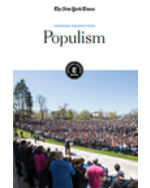 Recent elections around the world have been shaped by populism, where flamboyant politicians gather large crowds and campaign on behalf of "the common people." From Brexit to Donald Trump to countless other movements in Europe and the Americas, populism has changed the political conversation, often to the far right. From its origins in farmers' and workers' movements in the 19th century, we find countless populist politicians, right, left, center and beyond, using humble credentials, sometimes for and sometimes against the interests of "the people." In the end, the story of populism is the story of democracy: its transformations, its strengths, and at times its greatest threats. Media literacy terms and questions round out this collection to engage readers beyond the text.

Front Cover.
Title Page.
Copyright Page.
Contents.
Introduction.
Farmers and Laborers Build a Movement.
1: The National Grange: Declaration of Its Objects and Purposes..
2: The Great Railroad Strike.
3: Bigots in a Legislature: The Farmers' Alliance Idea of Lawmaking..
4: Coxey Without His ‘Army’: He Comes to New-York as a Horse-Dealer..
5: Bryan the Demagogue: Career of the Man Who Will Lead the Silver Fanatics..
6: Furor Over Mary Lease: The Kansas Woman Orator Has a Crowd in Cooper Union..
7: Roosevelt's Issues: Ground on Which He Will Stand in Campaign..
Mass Politics and Fascism After the First World War.
8: Bolshevism Seen as New Religion.
9: Italy's Frankenstein and His Monster..
10: New Popular Idol Rises in Bavaria.
11: Priest Defends His Radio Talks.
12: Fascists Plan Corporate State in Britain, Mosley Declares.
13: Shadows That Fascism Casts Before It.
14: A Communist From Kansas Is a National Issue.
15: Fascist Parallels Seen in Peronism.
Post-War Populism Lives on the Fringes.
16: Poujadistes Pitch Fruit at French Candidates.
17: The Ghost of Populism Walks Again.
18: Religious Revival Is Sweeping Across the World of Islam.
19: ‘A Man of the Right’ Is Rousing Passions in France.
20: The Politics of Frustration.
Attitudes of Anti-Globalization Spark a New Populism.
21: Rebels in Search of Rules.
22: In the Time of Hugo Chávez.
23: Bolivia's Newly Elected Leader Maps His Socialist Agenda.
24: Thousands Rally in Capital to Protest Big Government.
25: The Left Declares Its Independence.
26: Who Speaks for the Silent Majority?.
27: Europe's Right and Left on March to Populism.
28: The South's Lesson for the Tea Party.
Global Right-Wing Populism Overtakes the Establishment.
29: Voter Insecurities Feed Rise of Right-Leaning Populist Politicians.
30: How Can Donald Trump and Bernie Sanders Both Be ‘Populist’?.
31: Donald Trump Is Elected President in Stunning Repudiation of the Establishment.
32: Brexit's Bitter Winners.
33: How a Liberal Dissident Became a Far-Right Hero, in Hungary and Beyond.
34: Jair Bolsonaro Wins Brazil's Presidency, in a Shift to the Far Right.
35: Alexandria Ocasio-Cortez Is Leading and Following at the Same Time.
36: Abolish Billionaires.
Glossary.
Media Literacy Terms.
Media Literacy Questions.
Citations.
Index.