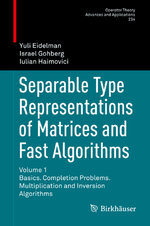 This two-volume work presents a systematic theoretical and computational study of several types of generalizations of separable matrices. The main attention is paid to fast algorithms (many of linear complexity) for matrices in semiseparable, quasiseparable, band and companion form. The work is focused on algorithms of multiplication, inversion and description of eigenstructure and includes a large number of illustrative examples throughout the different chapters. The first volume consists of four parts. The first part is of a mainly theoretical character introducing and studying the quasiseparable and semiseparable representations of matrices and minimal rank completion problems. Three further completions are treated in the second part. The first applications of the quasiseparable and semiseparable structure are included in the third part where the interplay between the quasiseparable structure and discrete time varying linear systems with boundary conditions play an essential role. The fourth part contains factorization and inversion fast algorithms for matrices via quasiseparable and semiseparable structure. The work is based mostly on results obtained by the authors and their coauthors. Due to its many significant applications and the accessible style the text will be useful to engineers, scientists, numerical analysts, computer scientists and mathematicians alike.​