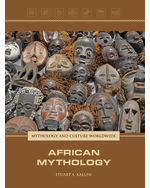 This volume of Lucent's Mythology and Culture Worldwide Series looks at some of the popular myths of Africa and discusses their role in the culture and the values they reflect. The title touches on how hip-hop music has its roots in African mythology and how these ancient beliefs continue to influence the modern world.