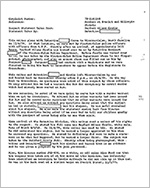 The Greensboro Massacre, 1979: Confrontation between the Ku Klux Klan and the Communist Workers Party

On November 3, 1979 a rally and march of African American industrial workers and Communists was planned in Greensboro, North Carolina against the Ku Klux Klan. The "Death to the Klan March" was to begin in a predominantly black housing project called Morningside Homes. Communist organizers publicly challenged the Klan to present themselves and "face the wrath of the people". During the rally, a caravan of cars containing Klansmen and members of the American Nazi Party drove by the housing projects where the Communists and other anti-Klan activists were congregating. What then occurred is in dispute, from rock-throwing and taunts on both sides to the sound of gunfire and deaths of five protest marchers. This collection of FBI, local and state police, Bureau of Alcohol, Tobacco, and Firearms, and the Civil Rights Division of the Justice Department, shed new light on the motivations of the Communist organizers, the shootings, subsequent investigations, and efforts to heal the Greensboro community.