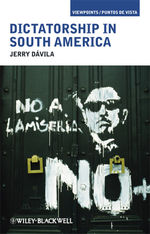 Assassination and political upheaval characterize the Cold War period in South America. Dictatorship in South America explores the Latin American experience of military dictatorship during this era, depicting citizens relationship with the brutal juntas that cycled in and out of power. Focusing on the experiences of Brazil, Chile, and Argentina, Dictatorship in South America delves into the wider political aftermath of the Cuban Revolution, an event that captured the minds of the public and pushed political regimes toward greater conservatism. Dávila argues that the radical utopian dreams of students and workers in the aftermath of the Cuban Revolution, fuelled in later years by events in 60s America and Europe, were confronted by equally radical right-wing projects realized by the armed forces in Brazil, Chile and Argentina. Yet behind the appearance of order and progress promoted by the generals, whose unapologetic capitalism disguised unsustainable capital flight and exploitation, lay internal disorder, violence, and the systematic abuse of human rights: the disappeared were a real social group, albeit defined by their absence and presumed deaths. This history of three countries experience with dictatorship, economic crisis and grassroots re-democratization brings a new perspective to the study of modern Latin American history.