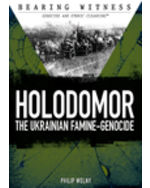 One of the lesser-known historical crimes that wiped out millions of people was Holodomor (loosely translated from Ukrainian as "death by hunger"), the famine and genocide that occurred during Soviet rule between 1932 and 1933. This book relates the shocking story of how a natural disaster was weaponized by the Soviet Union under the rule of Joseph Stalin to punish a whole people. Evocative photographs with compelling background and analysis give readers the story of a tragic chapter of European history in the twentieth century, while tying the event to our all-too-relevant modern context