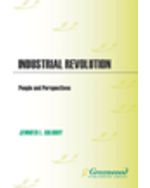 The Industrial Revolution did not merely change the American workplace. The manufacturing boom of the nineteenth century utterly redefined American life, fostering a new consumer culture while dividing laborers from owners, the working class from the middle class, native-born citizens from foreigners, and free men from slaves.

Industrial Revolution: People and Perspectives offers a well-informed look at the impact of new labor practices in the 1800s. It analyzes this pivotal moment in the broader context of the nation's economic development, measuring its consequences for Americans as both workers and consumers in all regions of the country.

Industrial Revolution examines what industrialization meant for American artisans, women workers, slaves, and manufacturers. It shows how this new working world led to sharpening class divisions and expanded consumerism. Throughout, groundbreaking social historians draw on 19th-century primary documents and the latest research to show how the Industrial Revolution transformed the life the average American.