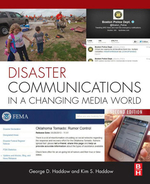 Communications are key to the success of disaster mitigation, preparedness, response, and recovery. Accurate information disseminated to the general public, to elected officials and community leaders, as well as to the media, reduces risk, saves lives and property, and speeds recovery. Disaster Communications in a Changing Media World, Second Edition, provides valuable information for navigating these priorities in the age of evolving media. The emergence of new media like the Internet, email, blogs, text messaging, cell phone photos, and the increasing influence of first informers are redefining the roles of government and media. The tools and rules of communications are evolving, and disaster communications must also evolve to accommodate these changes and exploit the opportunities they provide. Disaster Communications in a Changing Media World, Second Edition, illuminates the path to effective disaster communication, including the need for transparency, increased accessibility, trustworthiness and reliability, and partnerships with the media.Includes case studies from recent disasters including Hurricane Sandy, the 2011 tsunami in Japan, and the Boston Marathon bombings Demonstrates how to use blogs, text messages, and cell phone cameras, as well as government channels and traditional media, to communicate during a crisis Examines current social media programs conducted by FEMA, the American Red Cross, state and local emergency managers, and the private sector Updated information in each chapter, especially on how social media has emerged as a force in disaster communications