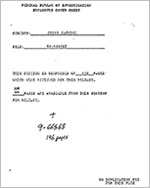 Black Americans of all political persuasions were subject to federal scrutiny, harassment and prosecution. The FBI enlisted black "confidential special informants" to infiltrate a variety of organizations. Hundreds of documents in this collection were originated by such operatives. The reports provide a wealth of detail on "Negro" radicals and their organizations that can be found nowhere else.

This collection consists of a select group of small microfilm products including: