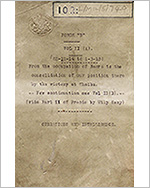 The Mesopotamian Campaign deserves to be far better known than it is—both in terms of its impact on the war and the subsequent course of the history of the Middle East. This new collection provides the opportunity to review the telegrams, correspondence, minutes, memoranda and confidential prints gathered together in the India Office Military Department on Mesopotamia. In 1914 the British/Indian Army expedition to Mesopotamia set out with the modest ambition of protecting the oil concession in Southern Persia but, after numerous misfortunes, ended up capturing Baghdad and Northern Towns in Iraq. Initially the mission was successful in seizing Basra but the British/Indian forces found themselves drawn North, becoming besieged by Turkish forces at Kut. After various failed relief attempts the British surrendered and the prisoners suffered appalling indignities and hardship, culminating in a death march to Turkey. In 1917, a new Commander-in-Chief was appointed but, as usual in Iraq, military policy kept changing. Hopes that the Russians would come into the war were dashed by the Revolution. Operations were further frustrated by the hottest of summers. Fighting against Turkish forces continued right up to the Armistice. The conduct of the Campaign was subject to a Commission of Inquiry which was highly critical of numerous individuals and the administrative arrangements.