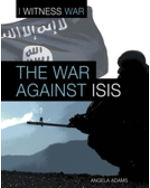 I Witness War: The War Against ISIS, 1st Edition

Today, war is often waged not against other countries, but against terrorist groups that change, reorganize, and fight using guerilla tactics. ISIS is no exception, and the terrorist organization's evolution is often unpredictable and always unsettling. This volume paints a detailed picture of the forces combatting ISIS and explains the history of the fight while emphasizing the people who have experienced the senseless violence ISIS has wrought.