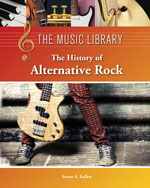 The newest addition to the Music Library series, this title discusses the history of alternative rock and the ethos of alt-rockers as rebels who value independence, experimentation, and truth-telling. Rather than making music for broad commercial appeal, these musicians drew from a variety of styles that were considered unfriendly for consumers. Over the years, alternative rock has spawned mash-ups of garage rock, punk, new wave, rap, thrash, and hardcore. This group of indie rockers not only created a new sound but also put forth a different attitude, as they outwardly rejected the musical standards and sales practices set by major record companies.