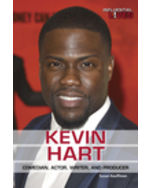 Kevin Hart is a well-known comedian and actor who has starred in television shows and movies for nearly two decades. More than a funny man, however, Hart works hard behind the camera and on stage as well. This lively and enlightening text will help readers understand the business behind the man and will allow them to understand the comedian better. Full-color photos from throughout Hart's life, along with quotes from the personality himself, will allow readers and fans a glimpse into his life. The glossary helps to understand new terminology, while Further Reading encourages deeper exploration into comedy.