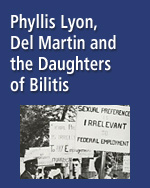 Phyllis Lyon, Del Martin and the Daughters of Bilitis

As outspoken lesbian organizers for civil rights, civil liberties, and human dignity whose personal relationship fueled decades of political activism, Phyllis Lyon and Del Martin created and helped shape the modern gay and feminist movements. They are stellar examples of engaged citizens: women of extraordinary courage, persistence, intelligence, humor, and decency, who refused to be silenced by fear. Not only were they founders in 1955 of the first lesbian rights organization in U.S. history, the Daughters of Bilitis (DOB), but they also were instrumental in the formation and growth of other related social movements, including the contemporary women’s rights movement.