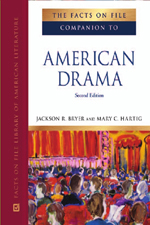 This encyclopedic guide provides more than 600 informative and mostly well-written entries on major plays, playwrights, directors, theater companies, and movements from the 18th century to the present. The A-to-Z format, coupled with two appendixes listing the winners of major drama awards through 2003 and a selected bibliography, makes this a useful tool for drama students and individuals wanting quick facts. Any one-volume treatment of an area of study as broad as this invites questions about inclusions and omissions and this title is no exception. For example, there are separate entries for "Musical Theater" and Stephen Sondheim, but not for other equally important figures such as Rodgers and Hammerstein or Bob Fosse. And why are there individual entries for all but four of the Pulitzer Prize-winning plays (excluding musicals)? The index is less than comprehensive and somewhat sloppy; absent are titles of plays and the names of playwrights mentioned in the text of broader entries. Finally, the text and the index have a confusing alphabetical scheme. Despite these flaws, this book remains a reasonable choice for libraries that can only afford one reference tool to cover such an expansive topic.-Betty S. Evans, Southwest Missouri State University, Springfield