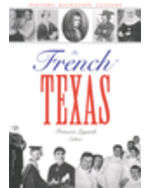 The flag of France is one of the six flags that have flown over Texas, but all that many people know about the French presence in Texas is the ill-fated explorer Cavelier de La Salle, fabled pirate Jean Laffite, or Cajun music and food. Yet the French have made lasting contributions to Texas history and culture that deserve to be widely known and appreciated. In this book, François Lagarde and thirteen other experts present original articles that explore the French presence and influence on Texas history, arts, education, religion, and business from the arrival of La Salle in 1685 to 2002. Each article covers an important figure or event in the France-Texas story. The historical articles thoroughly investigate early French colonists and explorers, the French pirates and privateers, the Bonapartists of Champ-d'Asile, the French at the Alamo, Dubois de Saligny and French recognition of the Republic of Texas, the nineteenth-century utopists of Icaria and Reunion, and the French Catholic missions. Other articles deal with French immigration in Texas, including the founding of Castroville, Cajuns in Texas, and the French economic presence in Texas today (the first ever published).