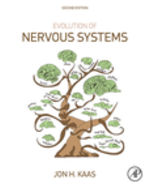 In the first edition of this important reference work, over 100 distinguished neuroscientists assembled the current state-of-the-art knowledge on how nervous systems have evolved throughout the animal kingdom. This second edition remains rich in detail and broad in scope, outlining the changes in brain and nervous system organization that occurred from the first invertebrates and vertebrates, to present day fishes, reptiles, birds, mammals, and especially primates, including humans.

Front Cover.
Half Title Page.
Title Page.
Copyright Page.
Editor-in-Chief.
Volume Editors.
Contributors to Volume 1.
Contents of All Volumes.
Preface.
Introduction to Volume 1.
Permission Acknowledgments.
Taxa.
1: Invertebrate Origins of Vertebrate Nervous Systems.
2: Evolution of Neural Crest and Cranial Placodes.
3: The Nervous Systems of Jawless Vertebrates.
4: The Brains of Teleost Fishes.
5: The Brains of Cartilaginous Fishes.
6: Adult Neurogenesis in the Teleost Fish Brain: Developmental Principles and Evolutionary Implications.
7: The Organization of the Central Nervous System of Lungfishes: An Immunohistochemical Approach.
8: The Organization of the Central Nervous System of Amphibians.
9: The Brains of Reptiles and Birds.
10: The Role of Endocasts in the Study of Brain Evolution.
Systems.
11: Chemoreceptors in Evolution.
12: Lateral Line Systems (Including Electroreception).
13: Evolutionary Trends in Land Vertebrate Hearing Organs.
14: Evolutionary Trends in Hearing in Nonmammalian Vertebrates.
15: A Comparative Overview of Locomotion and Its Neural Basis in Aquatic, Nonmammalian Chordates and Protochordates.
16: Conserved Features of the Basal Ganglia and Related Forebrain Circuits—From Lampreys to Mammals.
17: Brain Systems Underlying Social Behavior.
18: Functional Correlates of Brain and Brain Region Sizes in Nonmammalian Vertebrates.
Brain Regions.
19: Structure and Function of Regional Specializations in the Vertebrate Retina.
20: The Cerebellum of Nonmammalian Vertebrates.
21: The Optic Tectum: A Structure Evolved for Stimulus Selection.
22: The Diencephalon and Hypothalamus of Nonmammalian Vertebrates: Evolutionary and Developmental Traits.
23: The Amygdala.
24: The Hippocampus of Nonmammalian Vertebrates.
25: Function and Evolution of the Reptilian Cerebral Cortex.
26: The Pallium in Reptiles and Birds in the Light of the Updated Tetrapartite Pallium Model.