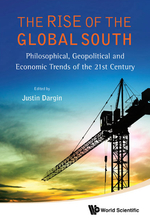 The Rise Of The Global South: Philosophical, Geopolitical And Economic Trends Of The 21st Century, 1st Edition

This book provides a broad and in-depth introduction to the geopolitical, economic and trade changes wrought with the increasing influence of the countries of the Global South in international affairs.The global role of the developing countries came to the forefront in 1974, when the United Nations General Assembly promulgated The New International Economic Order.Since then, the countries of the Global South, particularly China, India, Brazil, Saudi Arabia, South Africa and Qatar, made an indelible impact upon the worlds economic architecture.However, their true influence became starkly illustrated during the onset of the 2000s, when several seismic events occurred. The September Eleventh terrorist attacks - with the resultant debilitating wars in Iraq and Afghanistan - extreme world commodity price increases and the global financial crisis of 2007-2008 all served to wrench the epicenter of global influence increasingly southward. While the developed countries of the Global North became mired in economic stagnation with problems associated with the global financial crisis, their collective influence waned. Since then, the world has been attempting to accommodate, somewhat unevenly, the rising geopolitical and economic clout of the Global South.This book presents a collection of scholarly articles that, taken together, functions as a primer on the workings of the immense global changes at the beginning of the twenty-first century.