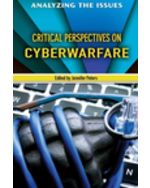 In the twenty-first century, political hostilities have moved largely from the battlefield to cyberspace. Since the Stuxnet virus was uncovered in 2010, built jointly by U.S. and Israeli intelligence to disarm the Iranian nuclear program, attention has been drawn to the real-life damage that such virtual programs can inflict. In this book, a range of experts, from journalists, to lawyers, to government officials, offer their varied opinions on the dawn of cyberwarfare, allowing readers to determine where they stand on this important issue.<\P>

Front Cover.
Half Title Page.
Title Page.
Copyright Page.
Contents.
1: Introduction.
2: What the Experts Say.
3: What the Government and Politicians Say.
4: What the Courts Say.
5: What Advocacy Organizations Say.
6: What the Media Say.
7: What Ordinary People Say.
Conclusion.
Bibliography.
Chapter Notes.
Glossary.
For More Information.
Index.
About the Editor.