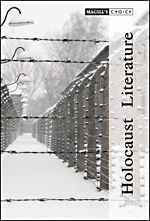 Holocaust Literature identifies the most important works on the Holocaust, by both first- and second-generation survivors as well as philosophers, novelists, poets, and playwrights reflecting on the Holocaust today. Reviews of the classics of Holocaust literature are arranged alphabetically by title and include histories, biographies, memoirs, diaries, testimonials, eyewitness accounts, philosophy, social criticism, novels, short fiction, poetry, and plays. Included are key works, from Anne Frank's Diary of a Young Girl to Hannah Arendt's Eichmann in Jerusalm, Primo Levi's Survival in Auschwitz, Elie Wiesel's Night, and Simon Wiesenthal's The Sunflower.

"Teachers and students can use entries as either extensions or as starting points in exploration of Holocaust literature. Recommended for high school, college and public libraries." --Doug's Student Reference Room, June 2008

Front Cover.
Half Title Page.
Title Page.
Copyright Page.
Publisher's Note.
Editor's Introduction.
Contributors.
Nazi Concentration Camps.
Holocaust Chronology.
Complete List of Contents.
The Accident.
After Auschwitz.
Albert Speer.
All Rivers Run to the Sea.
And the Sea is Never Full.
“The Angel of History”.
Anya.
At the Mind's Limits.
Auschwitz and After.
Austerlitz.
“Babii Yar”.
Badenheim 1939.
Constantine's Sword.
“Daddy”.
Daniel's Story.
“Death Fugue”.
The Deputy.
The Destruction of the European Jews.
The Diary of a Young Girl.
The Double Bond.
The Drowned and the Saved.
Eichmann In Jerusalem.
“Elegy for N. N.”.
Enemies.
Europe Central.
Explaining Hitler.
The Fall of France.
Fateles.
The Fifth Son.
Friedrich.
The Gates of the Forest.
Ghetto.
God's Presence in History.
Gone to Soldiers.
The Hiding Place.
The History of Love.
History On Trial.
Hitler.
The Hitler of History.
Hitler's Willing Executioners.
The Holocaust In American Life.
Holocaust Politics.
Holocaust Testimonies.
House of Dolls.
I Will Bear Witness.
In Kindling Flame.
“In the Blue Distance”.
Incident at Vichy.
An Interrupted Life.
Into That Darkness.
Jews.
The Journey Back.
“Journey Through the Night”.
The Last of the Just.
Lest Innocent Blood be Shed.
Letters and Papers From Prison.