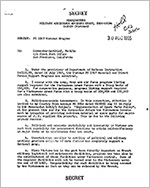 The involvement of the United States in the affairs of Vietnam began with grants of money and military equipment, grew with the dispatch of military advisers and maintenance personnel, and mushroomed with the commitment of ships, planes, tanks, and 550,000 troops. The United States created the Military Assistance and Advisory Group, Indochina, in 1950 to process, monitor, and evaluate American military aid to the French forces fighting in Southeast Asia. The French forces resented MAAG’s presence and hindered its operations. At first MAAG’s mission was not to train or advise the Vietnamese National Army, but by the time of the battle of Dien Bien Phu, those activities were under consideration by U.S. and French leaders. In 1955, MAAG Indochina, became MAAG Vietnam, and a separate MAAG was established in Cambodia. In 1955–1956, MAAG Vietnam, took over from the French the training and organizing of the Vietnamese National Army. The task facing MAAG Vietnam was enormous.