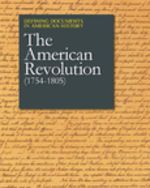 Front Cover.
Half Title Page.
Title Page.
Copyright Page.
Contents.
Complete List of Contents.
Publisher's Note.
Introduction.
Contributors.
Other Frontmatter.
Founding Documents.
1: Resolutions of the Stamp Act Congress.
2: The Declaration and Resolves of the First Continental Congress.
3: The Rights of the Colonists.
4: A Summary View of the Rights of British America.
5: Give Me Liberty or Give Me Death.
6: Declaration of the Causes and Necessity of Taking Up Arms.
7: Common Sense.
8: Declaration of Independence.
9: Articles of Confederation.
10: Constitution of New York.
11: Constitution of Massachusetts.
12: A Defence of the Constitutions of Government of the United States of America.
13: Constitution of the United States.
14: George Washington's First Inaugural Address.
15: The Bill of Rights.
16: Thomas Jefferson's First Inaugural Address.
Speeches and Political Tracts.
17: On the Right to Tax America.
18: Rules by Which a Great Empire May Be Reduced to a Small One.
19: Paul Revere's Engraving of the Boston Massacre.
20: John Hancock's Boston Massacre Oration.
21: An Address to the People of England, Scotland, and Ireland on the Present Important Crisis of Affairs.
22: Proclamation on Behalf of King George III.
23: The Farmer Refuted.
24: Speech on Conciliation with America.
25: Federalist No. 10.
26: Speech Delivered at the Virginia Convention Debate on the Ratification of the Constitution.
27: Commonwealth of Massachusetts on the Sedition Act.
28: The Dangers of American Liberty.
29: History of the Rise, Progress and Termination of the American Revolution.
30: Supplemental Historical Documents.
The Revolution in Letters.
31: Letters of Abigail Adams to John Adams.
32: Letters from a Farmer in Pennsylvania to the Inhabitants of the British Colonies.
33: Account of Shays's Rebellion.
34: Letter on the Rebellion in Springfield.
35: Letters on Independence.
36: Letter from George Washington to Martha Washington, June 18, 1775.
37: Letter to the Committee of Merchants in London.
38: Letter on the Virginia Constitution.
39: Letters from an American Farmer.
40: From the Commissioners for Negotiating a Peace with Great Britain.
41: Letters of a Countryman.
42: New York Legislature Committee of Correspondence to George Washington.
43: Supplemental Historical Documents.