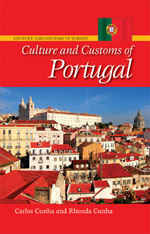 Portugal is evolving quickly as an integrated part of modern Europe. What was until the mid-1970s an old-world society, where 80 percent of the economy was controlled by an oligarchy of eight elite families, is now increasingly a model of an advanced European state. Portugal now ranks highly among the countries of the world in level of globalization and quality of life; it even boasts one of the best-developed renewable energy infrastructures of any developed country. Despite such widespread modernization, however, "old country" Portuguese traditions persist in the political realms, as well as the traditional lifestyles that endure in the countryside. CULTURE AND CUSTOMS OF PORTUGAL devotes careful attention to such topics as Portuguese holidays, media, marriage, gender roles, architecture, and education, providing readers with a full account of Portugal's rich heritage and modern culture. The drastic changes in the nation following the 1974 military coup that overthrew a 48-year dictatorship receive special attention.