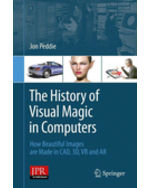 The History of Visual Magic in Computers, 1st Edition

If you have ever looked at a fantastic adventure or science fiction movie, or an amazingly complex and rich computer game, or a TV commercial where cars or gas pumps or biscuits behaved liked people and wondered, “How do they do that?”,  then you've experienced the magic of 3D worlds generated by a computer.3D in computers began as a way to represent automotive designs and illustrate the construction of molecules. 3D graphics use evolved to visualizations of simulated data and artistic representations of imaginary worlds. In order to overcome the processing limitations of the computer, graphics had to exploit the characteristics of the eye and brain, and develop visual tricks to simulate realism. The goal is to create graphics images that will overcome the visual cues that cause disbelief and tell the viewer this is not real. Thousands of people over thousands of years have developed the building blocks and made the discoveries in mathematics and science to make such 3D magic possible, and The History of Visual Magic in Computers is dedicated to all of them and tells a little of their story.It traces the earliest understanding of 3D and then foundational mathematics to explain and construct 3D; from mechanical computers up to today's tablets. Several of the amazing computer graphics algorithms and tricks came of periods where eruptions of new ideas and techniques seem to occur all at once. Applications emerged as the fundamentals of how to draw lines and create realistic images were better understood, leading to hardware 3D controllers that drive the display all the way to stereovision and virtual reality.