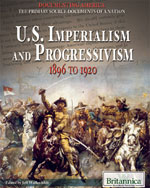 With one eye on the world and one on the home front, the United States at the turn of the 20th century was distinguished both by its emerging global engagements—including the acquisition of new territories and its involvement in the First World War—and the social movements that surged throughout the country. Readers examine American history between the end of the Civil War and the end of World War I, considering in depth both the imperialist and progressive influences that heralded the country’s future position as a major force on the international stage. Meticulously chosen articles, speeches, and other primary source documents are included alongside narrative to provide a complete picture of the era.

Front Cover.
Half Title Page.
Title Page.
Copyright Page.
Contents.
Introduction.
1: American Imperialism.
2: The Spanish-American War.
3: The New American Empire.
4: Unlocking the Pacific.
5: The Open Door in the Far East.
6: Building the Panama Canal and American Domination in the Caribbean.
7: The Progressive Movement.
8: The Origins of Progressivism.
9: Urban Reforms.
10: Reform in State Governments.
11: Theodore Roosevelt's Progressivism and William Howard Taft's Troubles.
12: The “Bully Pulpit”.
13: Taft's Presidency.
14: The Republican Insurgents.
15: The 1912 Election.
16: Woodrow Wilson: The President as Prime Minister.
17: The New Freedom and Its Transformation.
18: Woodrow Wilson and Intervention in the Mexican Revolution.
19: “Over There”: The United States and World War I.
20: The Struggle for Neutrality.
21: Loans and Supplies for the Allies.
22: German Submarine Warfare.
23: Arming for War.
24: The United States Enters the Great War.
25: Break with Germany.
26: Mobilization.
27: America's Role in the War.
28: Woman Suffrage.
29: Wilson's Vision of a New World Order.
30: The Paris Peace Conference and the Treaty of Versa.
31: The Fight Over the Treaty and the Election of 1920.
Conclusion.
Appendices (Documents).
Albert Shaw: The Blowing up of the Maine (1898).
Charles Denby: The Evident Fitness of Keeping the Philippines (1898).
William Jennings Bryan: The Paralyzing Influence of Imperialism (1900).
John Hay: The Open Door Policy (1899).
Theodore Roosevelt: Corollary to the Monroe Doctrine (1905).
Jane Addams: Industrial Amelioration and Social Ethics (1902).
Amos P. Wilder: “Governor La Follette and What He Stands for” (1902).
Manifesto of the Industrial Workers of the World (1905).
William Howard Taft: Defense of a High Tariff (1909).
Theodore Roosevelt: The New Nationalism (1910).
Woodrow Wilson: First Inaugural Address (1913).
Louis D. Brandeis: The Money Trust (1913).
Woodrow Wilson: The Tampico Affair (1914).
William Jennings Bryan: American Protest Over the Sinking of the Lusitania (1915).
Leonard Wood: Military Unpreparedness (1915).
Susan B. Anthony: “The Status of Woman, Past, Present, and Future” (1897).
Charles A. Beard: Reasons for His Resignation from Columbia University (1917).
Woodrow Wilson: Peace without Victory (1917).
Woodrow Wilson: Fourteen Points (1918).
Henry Cabot Lodge: Reservations with Regard to the Treaty of Versailles (1919).
Glossary.
Bibliography.
Index.