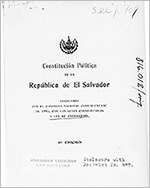 Revolution in Honduras and American Business: The Quintessential "Banana Republic"

Honduras is the "standard" for a "banana republic" having been O. Henry's model. This collection details more than the political and financial machinations of the fruit companies, but also the graft and corruption of the national government, the American banking community's loans, the U.S. government's response and the various aborted popular/revolutionary uprisings. The largest single group of records relates to Honduran political affairs; pertaining chiefly to the turbulent political situation and almost continuous revolutionary activity in Honduras. Included are discussions of boundary disputes and border troubles with EL Salvador, Nicaragua, and Guatemala and revolutionary movements originating from these neighboring countries and from Mexico; German activities in Honduras in World War I; landing of U.S. Marines to protect U.S. citizens during revolutions; cases of alleged violation of neutrality laws, and shipment of arms and munitions to Honduras from the U.S.; the participation of Sumner Welles in a conference to mediate the revolution in 1924; and presidential campaigns and elections. Another large group of records relates to financial affairs and concerns such matters as the proposed adjustment of the Honduran debt by the United States, loan negotiations and agreements between the Republic of Honduras and the J. P. Morgan Co. and other banking groups in the U.S., re-funding of the internal debt of Honduras, settlement of Honduras' foreign debt, and loans to the Government of Honduras by various fruit companies.