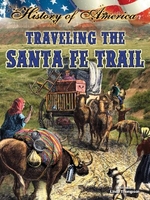 Between 1821 and 1880, the Santa Fe Trail was primarily a commercial highway connecting Missouri and Santa Fe, New Mexico. When the Treaty of Guadalupe Hidalgo ended the war in 1848, the Santa Fe Trail became a national road connecting the United States to the new southwest territories. The trail was also used by stagecoach lines, thousands of gold seekers heading to the California and Colorado gold fields, adventurers, fur trappers, and emigrants. In 1880 the railroad reached Santa Fe and the trail faded into history. This title will allow students to delineate and evaluate the argument and specific claims in a text, assessing whether the reasoning is sound and the evidence is relevant and sufficient.

Front Cover.
Other Frontmatter.
Title Page.
Copyright Page.
Table of Contents.
1: Trade Routes from Sea to Shining Sea.
2: The History of the Santa Fe Trail.
3: The Heyday of the Trail.
4: The Mexican War and the Legacy of the Trail.
Biographies.
Timeline.
Reference.
Websites to Visit.
Show What You Know.
Glossary.
Index.
Other Backmatter.